Will be getting this blog back up and running.


A group of us local gamers have decided to do a podcast.  We are also combing our blogs onto the KiwiHammer website.

Now I could do a long blog post about what this all means, but Jeff over at Thelittlewaaghthatcould has done a very good one.  So because I am lazy, I will just copy and paste it here.

The five of us have been hard at work the last few weeks preparing our website, figuring out a format for the show, learning a bit about sound editing and recording a test episode. At this stage we'll be recording our first full length formatted episode on the 2nd of July and releasing it shortly after.

All five of us love the hobby and the tournament scene and it is our aim to generate content both on our new website and podcast which incorporates the community here in NZ and all it has to offer; from the   filth mongering Skaven players to the Hobby Heroes with two giants, we want to include you and the things you love about our hobby. We want your feedback and your involvement. We're all busy guys so our content is going to be a bit rough around the edges initially but we'll strive to improve with your help.

As such I invite all of you to head over to:

to check out our new site and give us a yell for any ideas you have about what you want to hear on the podcast. We've got Episode 0 (our test format) up if you'd like to check it out.

The other major aspect of the site is that it will also function as a new blog for James Brown, Sam Whitt, Locky Reid and myself. This means that we will be wrapping up our current blogs, migrating some of our existing content (such as my Battle Reports) to the new blog and all blogging on the Kiwi Hammer website. This will allow us to collect a large amount of content in one place and provide nearly daily updates. We feel that this will better serve the community than our current 3 blogs.

Thanks for reading and I look forward to hearing from yall on the new site.

So thats whats happening! I am really looking forward to doing this, so any support and feedback is much appreciated.

So I will be doing all my blogging over at Kiwihammer now, so head on over!

Thanks guys.
Posted by Sam Whitt at 20:04 No comments:

Sorry for the lack of updates.  These chariots are pretty much finished, just need to finish the long black mouth thingy and put some grass tufts on the bases, 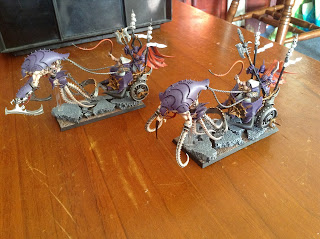 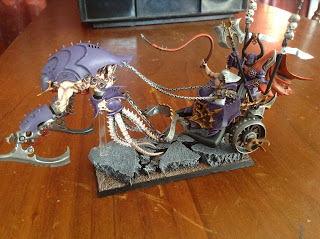 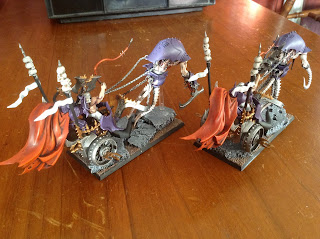 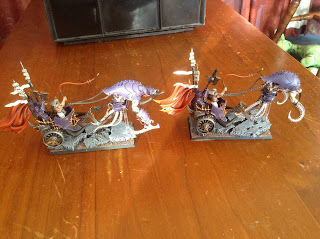 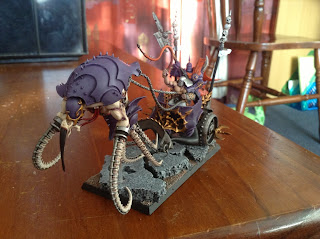 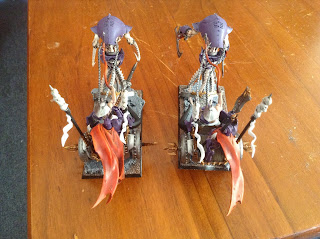 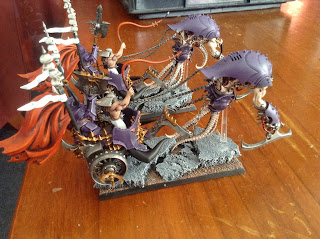 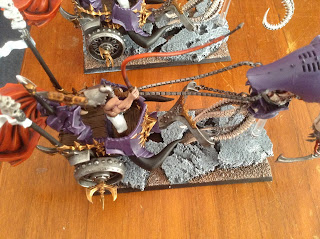 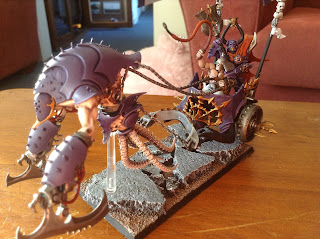 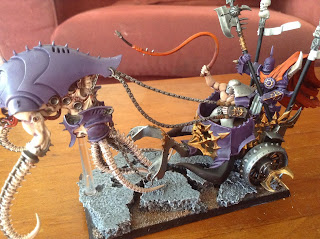 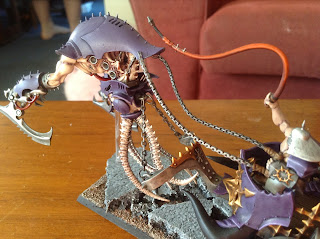 Cheers.  Horned Gobbo is coming up next week and am really looking forward to it.  Once the list deadline has passed (15th) I will post my list and thoughts.
Posted by Sam Whitt at 15:05 4 comments:

Just thought I would post some stuff on my fledgling Slaaneshii incursion.  All the models bar the hounds are primed and ready to be painted.  I have finished all of the basing work, just adding the tufts when the models are glued on.

I am not very good at taking photos, but I have posted some below for critique. 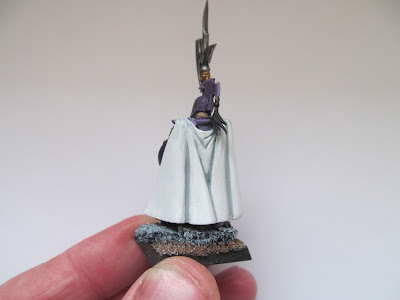 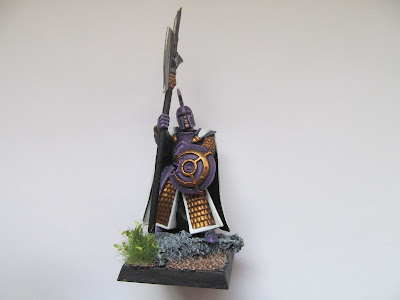 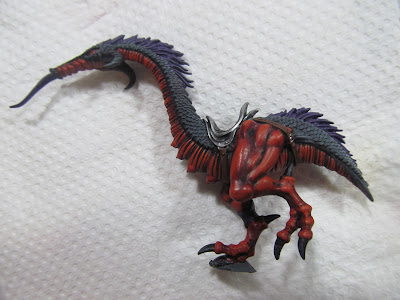 Painting up 2 gore beast chariot conversions at the moment, so will post some updates shortly.

So as most of you know, Runefang Vl was run a couple of weeks ago.  A big thanks to the two Peters - Williamson and Dunn - for umpiring the event and the supply of tables and terrain.
I took my Chaos Dwarfs for a long overdue run and they preformed quite well. 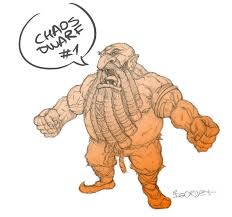 The carpet on the lvl4 was pretty good.  You get the LOS from the warmachines, and along with the 4++ he only died once.  To be honest, he just sat with the warmachines most games, but the carpet was his insurance to get out of dodge.
The Tauruk was fuckin ace all weekend, and will probably run 2 next time.  This was my third tournament in a row without a dispel scroll, and I didn't miss it.  I think I will continue this trend.
The Kdaii never died which was cool.  He did fail some Toughness tests that brought him down to 1 wound though!!  Deathshriekers and Magma cannons are absolutely brutal....I love them!

The armies I faced were Orcs, Skaven, Beasts, Lizards and Daemons.  To be honest, going into the tournament I knew my list had a massive weakness against Skaven, and it Showed.

The game against Pete was my only loss (20nil!)  and I won all my other games at least gaining 14 tournament points from each game which netted me 2nd place.  I was happy with this result, especially after gaining nothing game 2.

Some highlights of my games:
I am sure there are more, but it was a while ago.

So I have been busy converting up my Slaanesh WOC.  I will be assembling the whole army before I start to paint.  Here are some WiP pics. 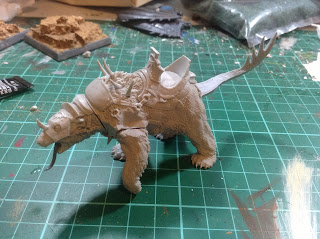 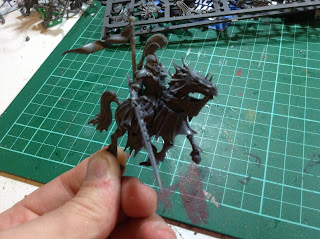 The "real" top 5 lists for Runefang 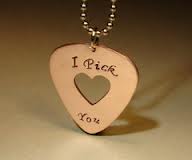 So these will be my predictions for Runefang VI.  Like Pete has said, they are based on list design, player talent and the kind of armies present at Runefang.

Ok so a massive cop out here.  I couldnt split these guys to be honest.  If any of them want to be higher on my list, and I know they all read my blog, I do accept bribes of Russian virgins, and Sweet and Sour Pork on rice.  They are all strong players with really solid armies, competition will be tight.

Yes, thats right folks, Mr "I want bear cav waa waa waa" Switzer is my #4 pick.  If he can avoid any massive mistakes and not get mind fucked (again) by Mal first round, I can see his cannons and Organ guns seriously ruining some hobby.  He is  really starting to improve his game, and will be a contender.....God now we will never shut him up.

Jeff has brought THE most annoying army list in Warhammer. Clouds of fucking skinks backed up by solid blocks of Saurus.....oh no wait, sorry got that wrong.  Jeff had a unit of Saurus at Natcon, but obviously the weird sized bases and non ability to shoot seriously hindered his gameplay.  Jeff is a real solid player, and with this army will be real strong.

So considering Pete might be too humble to pick himself, I will pick him.  Nasty as fuck army with the "Oh, I am in trouble here, turn around so you cant hurt me haha" Bell list, he was hard to go past. But I did. If I play you Pete, can you please explode the Bell, cheers.

Really like this list.  I know that it is the usual Black Knight bus list with super choppy Vamp lord, but I think it is time it has won a tournament.  The three units of Vargheists really help the list function, although the new FAQ hinders this slightly.  It will be super tight at the top, but I think it will pip Pete to the post.

As for me, probably mid table.  I would be really happy with top 5.  Haven't used the CD's in ages, so will be rusty.  Although, if all else fails I can cheat my way through as some people might not know the CD rules! 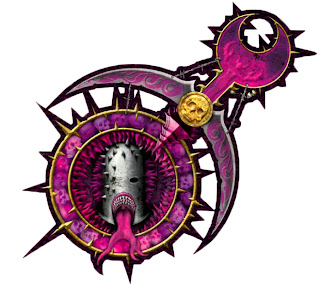 So while I await the arrival of my army from the northern wastes, I have been running possible army lists through my head and Quartermaster.

I am definitely running a Daemon Prince, but am a little bit sketchy on making it my Lvl4 wiz as well.  I really dont want that many points sucking its self off down a hole!  So I decided to see if I could get a Sorcerer lord and a DP in my list, and this is what I came up with.

The only thing i would like is flight on the DP, but there is no points left.  I also have no scroll.  My last 3 tournament lists have had no scroll, and I will continue this trait.

Sam Whitt
Otaki, Kapiti Coast, New Zealand
Hello enemies of Hashut. I am an avid Warhammer player from the land of the long white cloud. I collect Dark Elves, WOC, and of course CHAOS DWARFS!!! I have been gaming for around 15 years, and love painting and converting. But going to tournaments is my favourite thing in the hobby.

How many people care what I say...